CaffeGiordano, whose owners are Paola Giordano and Jennifer Boccia, has its roots in their respective grandparents who were "industrianti" merchants,
among the foods traded the colonials and especially the raw coffees were their passion.
The company was born as a small company that consistently made a rigorous selection of the product and has always placed particular meticulous care in all stages of processing, adapting itself to increasingly innovative technologies and processing methods, offering a superior product .
Over the years, the company has undergone several corporate transformations until the recent merger, a company of the same group created in 2015 with the aim of reorganizing the distribution and marketing of the company.

The experience and the consolidated professionalism of those who have been working for some time, is the guarantee that the pleasure of CAFFEGIORDANO always accompanies a careful and cordial service, because the goal is to spread the art and culture of Neapolitan coffee in the world .
It is a company that produces and markets coffee with waffle products, special coffee pods (hazelnut, chocolate, caramel, ginseng, pistachio), barley waffles, tea and herbal teas, compatible coffee capsules, ground roasted coffee for moka, roasted coffee beans, drip coffee.
The company is a partner of many national events, it is part of the everyday life of many people.
For the Giordano coffee also solidarity is a value of great reference: this is evidenced by social engagement initiatives that have involved it for several years,
and from the "GIO.PI humanitarian association - CAFFEGIORDANO & PINEDA" united for Angola based in Angola-Africa
For caffegiordano passion is the delicious ingredient of excellence !!! 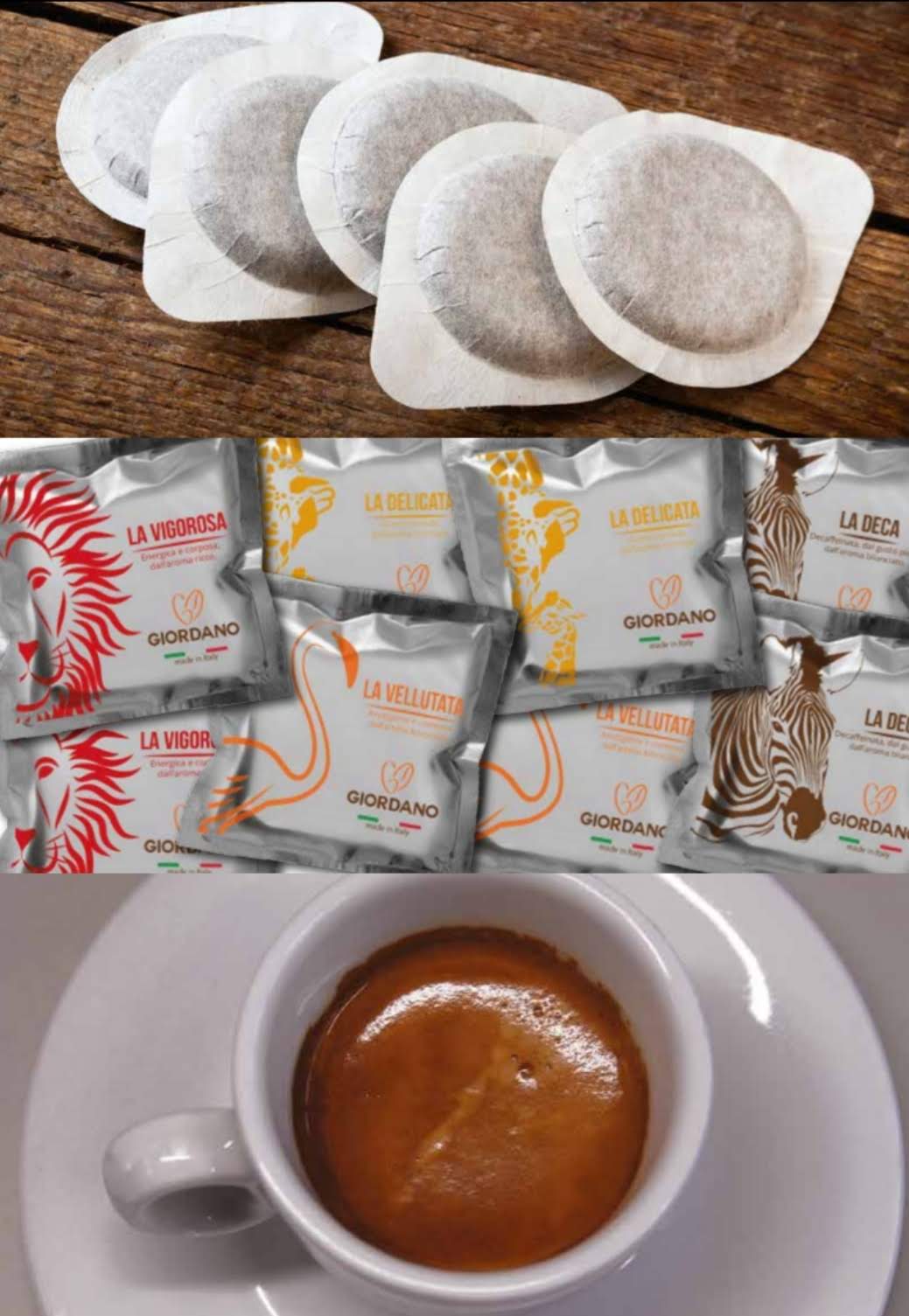 Our blend is the result of a combination of 8 varieties of coffee, processed with washed method: the fruits after harvest are shrunken, demucilaged, washed and then dried. They are shrunken by machines, then placed in tanks containing water, to remove the mucilage through machining. They are then dried in the sun, turning constantly to prevent molds. These washed coffee have organoleptic properties of high quality. They are from BRAZIL, COLOMBIA, COSTA RICA, IVORY COAST, GUATEMALA, KENYA, INDONESIA, majority of the species Arabica and Robusta, dosed in the right amount to get a high quality coffee. Creating a blend before roasting demands a more complex procedure but guarantees a more balanced and longer lasting taste. But for the highest quality in cup the roasting is just as important as the raw material. The our roasting process is precisely controlled, aiming at small temperature gradients through the grain.five good reasons to prefer coffee in pods !!! - Simpler treatment Percolation consists of the method used to extract the coffee from the pod or capsule: a flow of water at 90 ° C +/- which passes through the package and then reaches the cup in the form of espresso. Thanks to its physical characteristics, the percolation of the pods is much simpler: the water does not have to pass through resistant materials such as aluminum or plastic, but only a thin wrapper of paper, like that of the tea bag: this guarantees a creamier coffee, with a more homogeneous taste. - More economical The absence of materials such as plastic or metal reduces prices: on average, coffee pods cost 40% less than capsules, guaranteeing a better result. -Ecosostenibilità The pods are made of completely biodegradable materials: for this reason they can be easily thrown away in damp or recycled. Unlike capsules, which, as made with plastics and aluminum, should be disposed of in the undifferentiated and destined for landfills and incinerators. - More healthy With the wafers, the boiling water passes through a 100% natural vegetable paper filter, which does not release residues, you can't say the same thing about the capsules: the jet of boiling water that has to pierce the aluminum or plastic of which the capsules are composed risks carrying with it some residues of these substances even in the espresso; the 75 ° C plastic releases carcinogens, the machines deliver coffee around 90 ° / 98 ° C ..... so ..... - Universal compatibility The pods are a standard: they all have the same size and are compatible with any coffee machine, which is not the case with capsules, which often prove incompatible with the machine you have at home or in the office.

coffee Giordano, the coffee of pleasure 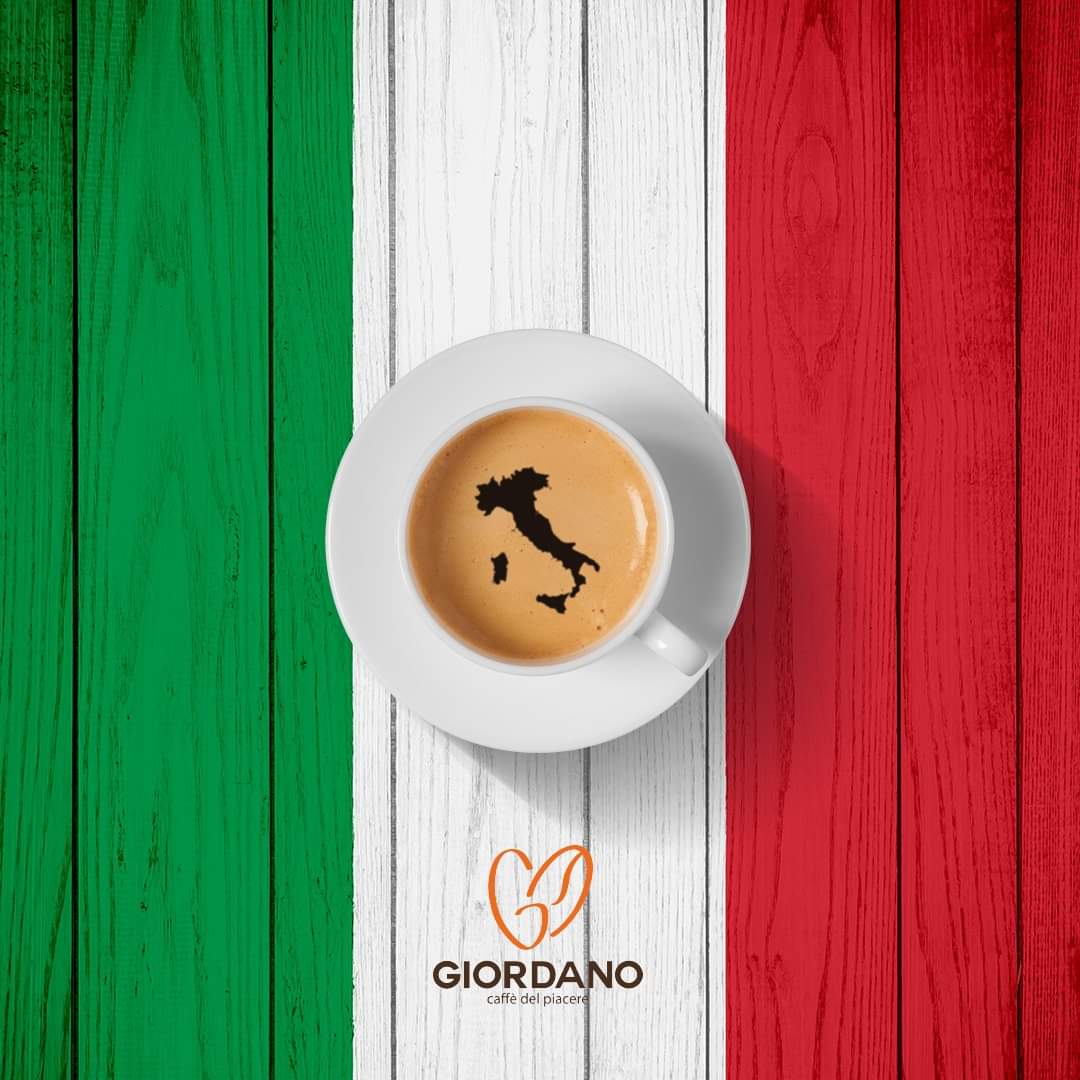 Our coffee is awakening, energy, pause, taste, pleasure ... it's getting to know each other, talking to each other, talking about the meaning of life, it's taking life lightly in spite of everything! .. It is meeting between lovers in the middle of a working day to exchange knowing smile, a hug, a look ... everything to say "yes, there are". We invite you to try ... we offer! 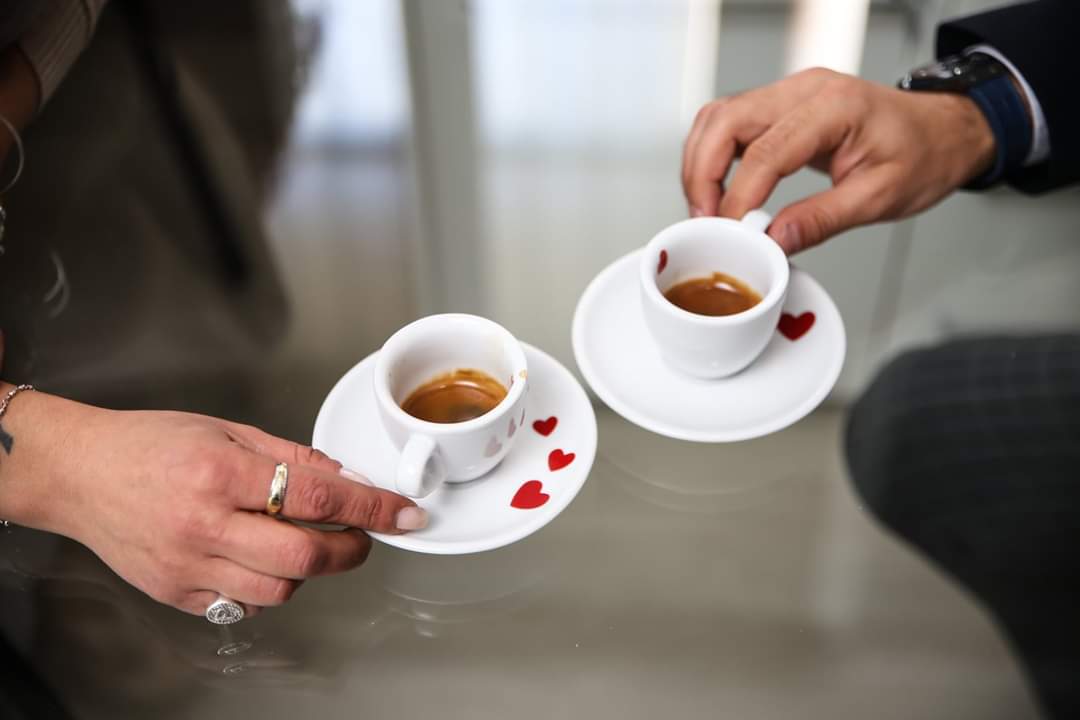 Our coffee is good on its own ... but beautiful together. Caffegiordano is the beginning of many stories of friendship, love, commercial relations ... it can last 10 minutes, half an hour, a whole afternoon or a whole life ... ..! 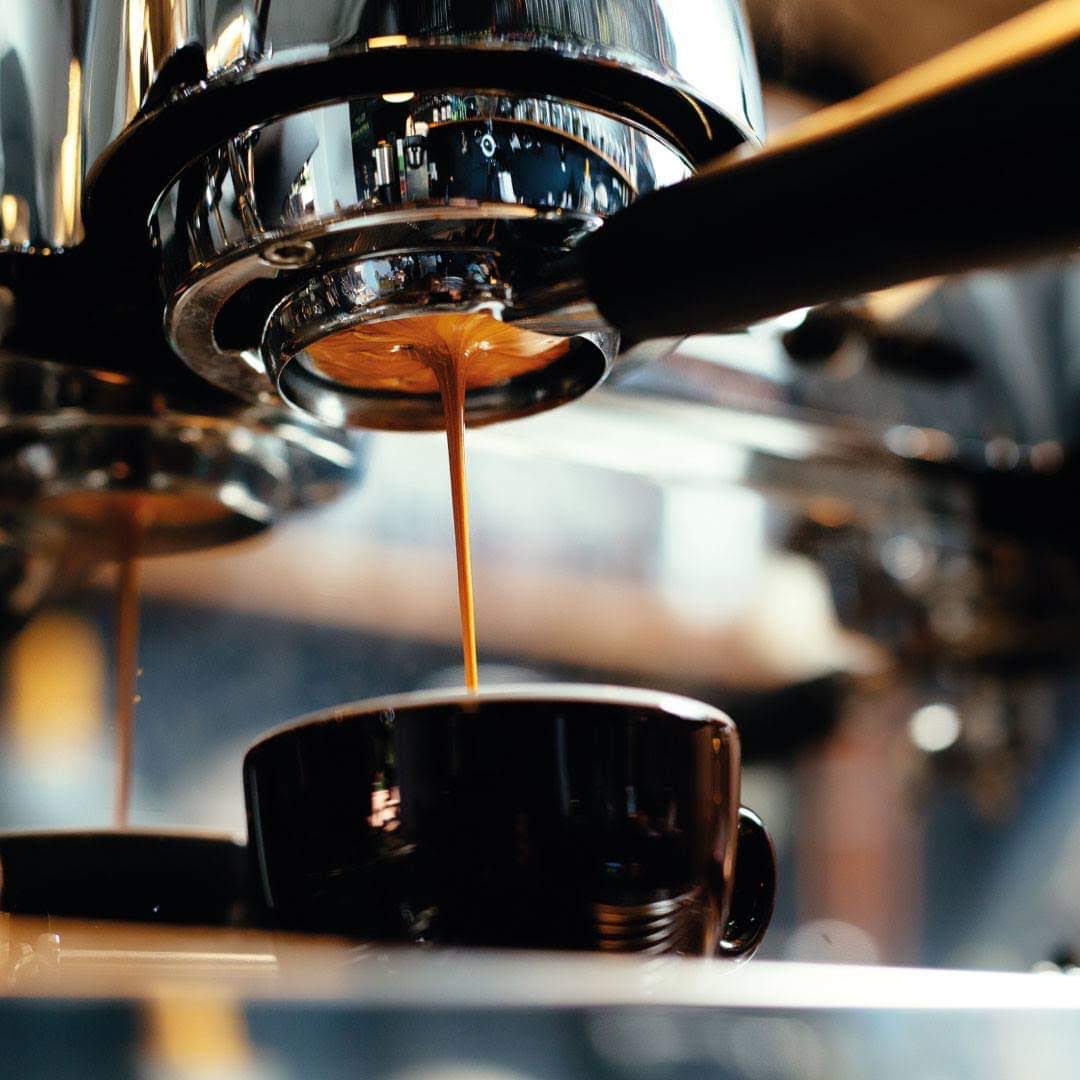 Our coffee blends for professional use that meet all tastes, thanks to the skill of the barista and the passion of coffee lovers. A gourmet art made of experience, knowledge, patience and passion that in Italy has the highest admirers. The" tazzulella 'e cafè" is always present on our tables. It holds one of the richest heritages of flavors and fragrances, of aromas but also of knowing how to do: it requires attention. A careless drink at the bar is sometimes not enough. 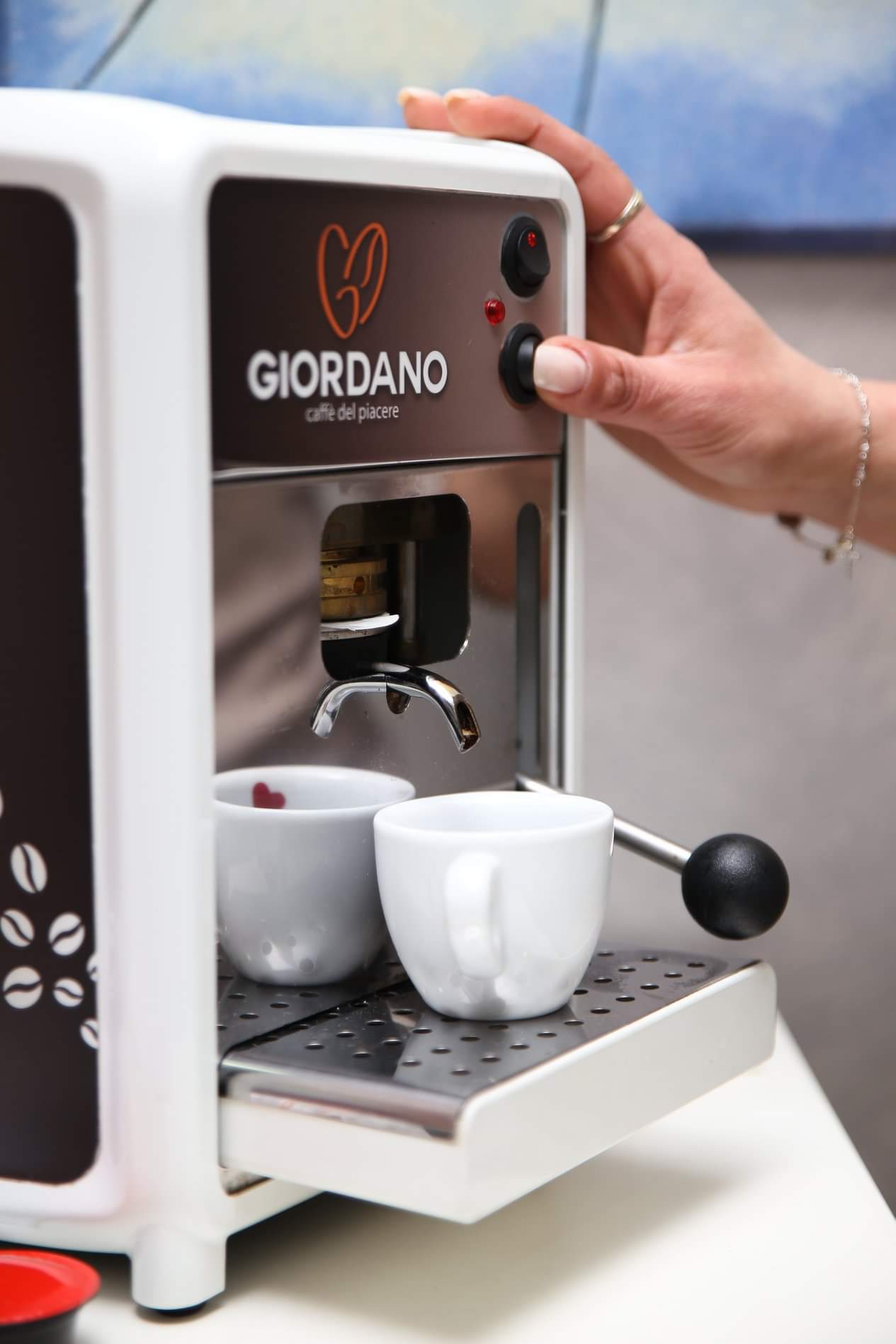