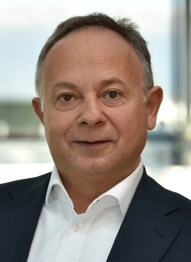 Born in Savona in 1961, a graduate of Business and Economics at LUISS Guido Carli University in Rome, Carlo Ferro has had a career of over 30 years in the management of companies highly oriented towards international competition in global markets.

Carlo Ferro assumed the Presidency of the ITA – ICE Agency on the 7th of January 2019 after his resignation as Chairman of the Board at STMicoelectronics (Italia) S.r.l.

At STMicroelectronics NV from 1999, he held various top management positions rising to President Finance Legal Infrastructure and Services.  He was also the Group’s Chief Financial Officer for over 15 years where he contributed to the development of one of the Italy's and Europe's technology champions worldwide, with growth results (a turnover from 2 to 8.5 billion USD from the Initial Public Offering (IPO), to when Carlo Ferro left as CFO last May) and in the same period, an increase in employment (from 20,000 to approximately 43,000 employees) and value creation (average annual total return for shareholders of 10.6% per year).

Carlo Ferro was Deputy Chairman at Assolombarda, as well as the designated representative for Industrial Policies and Revenue, and member of the Board of Directors of Digital Innovation Hub Lombardia, posts he resigned from to assure his total independence in the role of President of ITA – ICE Agency.

He is presently an advisor of the European Commission as member of the IPCEIC  (the Strategic Forum for Important Projects of Common European Interest), as well as adjunct professor of the LUISS Business School, and co-scientific director of its Master’s programme in Corporate Finance.

A former manager at IRI of Finmeccanica and Vice-President of Elsag Bailey Process Automation, Carlo Ferro started his career as a junior controller at the steel mill in Taranto and then dedicated his career to the development on international markets of large scale technology firms, listed on capital markets with the participation of the Italian State.

In over 20 years of experience working abroad, he managed international alliances and joint ventures in the USA, Sweden, Holland, China, Singapore and Japan and has served on the governance bodies of 25 companies in different industries, and in 7 countries within Europe, Asia and USA.